February 4, 2001. That, my friends, is the day that Wyvern was opened up for public testing. I would like to be posting this in the cabochon.com news right now where I could maybe say something about how far we've come now that we're at the eleven year mark. Unfortunately, that can't happen, but it does make you wonder how far we could've come in the last year had things gone differently.

When planning the big celebration to mark our 10 year anniversary, I tried to not only to create a single, fun day long event, but to create something that would move the game forward again. Without getting into a whole long backstory, we had spent the previous year and a half working on balance and bug fixes, which provided, shall we say... challenges for our loyal players to adapt to. But as we got the major issues worked out, we had begun to slow down, leaving only some "tweaks" here and there and large scale projects (like enchanting and random dungeons) on our list before we could move forward entirely.

Now, when I say "large scale projects" I mean, extremely time intensive things. Therefore, it would've been a little longer before we could get on with the fun stuff. But you guys had been so loyal to the game throughout all that that you deserved a a break. Thus, the event I created was centered around permanent content that you could enjoy long after the day was over. Below, I'll review that content and give you some behind the scenes information to go along with it:

Ah, costumes. Such a simple concept and yet, such a Salkand (har har har). Originally coded and introduced to the game by Janica, (via her wedding dress and tuxedo) these little things have been a pain since day one.

First, they were rather buggy. Not only did they hork the images of our poor giant and naga friends, but it set your gender to match whoever the costume was intended for. While it may have led to some amusing moments, such as the time Airick shook his fist at the anonymous tricky wizard who changed him to female, (before we knew that the costumes were the actual cause) it also made it pointless to ever create gender specific content.

Second, Avalon's introduction of a plethora of Halloween costumes actually created quite a controversy. It had become so easy to change your image and you had so many options that people begun to complain that it devalued the work they put in to attain their hof image.

As a result of all that, and some other things, costumes disappeared from the game for quite awhile. But they can be a lot of fun for players, so I thought that if we could get a bug free version up and running and devise some way to limit their use, we could bring them back. Thus I asked Contrare if he could code something that limited its use to only one day of the year (and fix the bugs). This request almost got shoved to the "not enough time" pile, but he pulled it together at the very last minute and I do believe they were quite the hit.

They also would have led to some fun times ahead - I always wanted to have automated holidays in Wyvern. Every year, on a certain day, new content would become accessible. You walk into Stensele and a celebration is going on or you walk into New Verden and a portal through time appears that takes you to our old style New Verden. We didn't yet have the code to do that with areas, but once a year costumes were the first step. Next we could have created the above mentioned content and filled it up with special items like obtainable costumes. So although it may seem sad to only get to be a little Wyvern once every February, you could've had the chance to be who knows what in {insert month}.

One other thing I had in mind for future additions to this concept were costume rooms. I don't know how feasible this would have been or if other wizards would have agreed that this would have been a good way to go, but it was on my list to see if we could set a map to allow you to wear your costume regardless of the day of the year. That way you could create parties to show off the various costumes you collected anytime you want and perhaps it would create a greater incentive to create parties in the first place (something that doesn't happen much since auction houses replaced emote rooms as the place to hang out).


Above is a video Vesrayech created of himself trying to conquer the redesigned arena. It was nice of him to put the work into getting it together and uploading it as I really wanted people to able to see what the changes entailed after all the work that went into it. You can compare it with the old arena by viewing the following videos:

I'm extremely pleased with how it turned out. It had some bugs, sure, but there was a time crunch (Contrare was working up until right before the anniversary) and the bugs were hard to spot with one wizard testing it at a time (who would've thought you'd all end up in the same arena maps? lol). Overall, though, I think players enjoyed it and most of the bugs were fixed by the time the game went down (I think there were one or two left on the list, plus we still hadn't been able to settle the whole statue thing - bummer).

For me, this was the most time consuming thing I worked on (although making the old New Verden come alive was by far the most tedious). In fact, it sucked up so much of my time that there were a number of things that I wasn't able to complete when I decided to push forward with this (I spent the better half of January consumed with it).

Contrare and I had previously discussed his plans for redoing the arena and I offered to help him with the map aspect at the time, but it was put on hold since our focus was still on bugs/balance. So it was nice to have a break to work on things like this which, btw, not only allowed us to provide you with this redone arena, but it allowed Contrare to redo the code in such a way where other wizards could use it in creating their own arenas (should they have wanted to). With that, who knows, you might have one day seen an Alaria Monster Arena or a Havisfel Monster Arena... okay, probably not, but the possibility would have been there moving forward.

As for the Minath Monster Arena, Contrare wanted two main things out of the redone maps; he wanted them rounder and he wanted them bigger. Basically, he wanted players to have more room to run around, cast spells, and avoid their foes. So I came up with the design seen in the above video and I incorporated rotating barriers in all but the boss levels, which have just two obelisks (fun fact: if you look at the obelisks the description reads "a strangely water-soaked, granite obelisk" in reference to a certain monster that rises from the sea).

I also decided to create a unique map for every level, which upped the count from 32 to 50 maps (some were reused in the previous design). Further, I instituted themes (forest, town, caves, grave, abyss, underwater) that lasted between 8 and 15 levels, with a boss type fight at the end of each that was a little harder than what came before and what comes after. Originally, I wanted to create a swamp theme, but we didn't have enough monsters to fill that out, so the Abyss got extended a bit. Had I done this, I probably would've made level 50 the demon boss level and had the chicken and actual boss be bonus levels. I also considered adding things like a dinosaur bonus level, (Rhialto originally talked about including them in the previous redo) but ultimately rejected that.

It may seem like no big thing, but the real killer was matching themes with the objective of creating an ever increasing degree of danger. I had to swap themes around, (originally I wanted the underwater theme to be right before the final boss level to kind of symbolize the boss being woken up from under the sea and rising out of the ocean, but the demons were just too powerful not to appear last) scrap/redo levels, and create whole new monsters to specifically fit certain levels (some monster images I had been saving up and some I finally got around to watering down from their First Day of Summer appearance). It worked out nicely, though, as I not only got to use them for the arena, but I was able to introduce them into the random lists at the same time so you guys had new monsters to fight everywhere.

Meanwhile, I worked to eliminate problem monsters that appeared in the previous design. Meaning, no more air elementals, diamond golems, or will 'o wisps. They were just too hard for specific individuals to beat, which is fine in the general game, where you can group or avoid them or wait for a summon to kill you without a clock ticking, but doesn't work so well for the competitive nature of the arena. Of course, the arena is by no means balanced to give each class and race a truly equal opportunity, but it is better.

Before I move on, I'd like to end this discussion of the arena with the below image of the entrance. Out of all the maps I designed for the arena, this is my favorite - I've said it before and I'll say it again... I LOVE those tiles of Binyamin's. 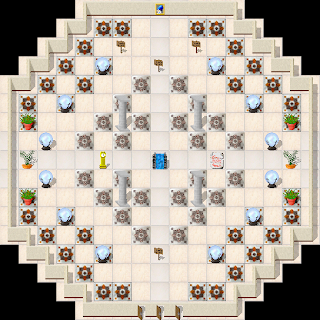 
Check back "soon" for part II of the anniversary retrospective. Coming up, I'll dissect such additions as the fae Wyston graveyard, the suggested playing time system, the original New Verden design, and more. I'll also be posting player comments/screenshots and I'll give some details on the things I wanted to have ready in time for the anniversary, but wasn't able to complete in time.
Posted by Arilou at 3:17 PM 4 comments