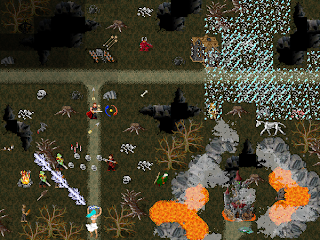 Just for fun I thought I'd post this little "screenshot" of a battle between an adventuring band and the creatures they have encountered within Forgotten Oak.

It has occurred to me since posting this that this would be a good basis for a story. You can start with the introduction of these five heroes, to each other, in the New Verden area and follow their adventures throughout the land. Rather than doing chapters in a book it could be a series of short stories and throughout you get a couple of images mixed in that visually show something described in the story. I'm way too busy to do something like that at the moment, but I find the idea intriguing and I may explore it sometime in the next few years.

It would make a good series of blog posts and an even better website feature. Additionally, the characters can be referenced in the game and it could be possible to meet them while exploring. Possibly during certain quests. It'll add a bit of flavor to the game and I've always wanted to have famous adventuring parties in the game. You know, people who townsfolk talk about with high praise and who you can later meet and battle against, join forces with, talk to, etc. However, this would be even better as the player will get to know every little detail of their rise to fame in a way I could never do just by using the game itself to tell their story. It could also create a bit of excitement for players to end up hearing about or meeting in the game.

But in the here and now, I thought the screenshot came out nicely. Its purpose was to show off the most exciting aspects of Wyvern's battle features while using some of the game's better graphics. For someone who never played Wyvern before I want them to see it and go; "Wow, I have to try that!" The current game screenshots on cabochon.com, don't really do that. There was an attempt to update them a bit in 2003, but nothing ever came of it and even so, what was captured then doesn't display what the game is capable of today. In the future we'll see about trying to get them updated, (they won't be as stylized as this image is) but until Rhialto follows through with his web-based client plans I'm inclined to hold off on that as the purpose of good screenshots is to show off not just the game, but the client and its features as well. So any ones made of the current client would be vastly outdated as soon as that came about.
Posted by Arilou at 8:56 PM